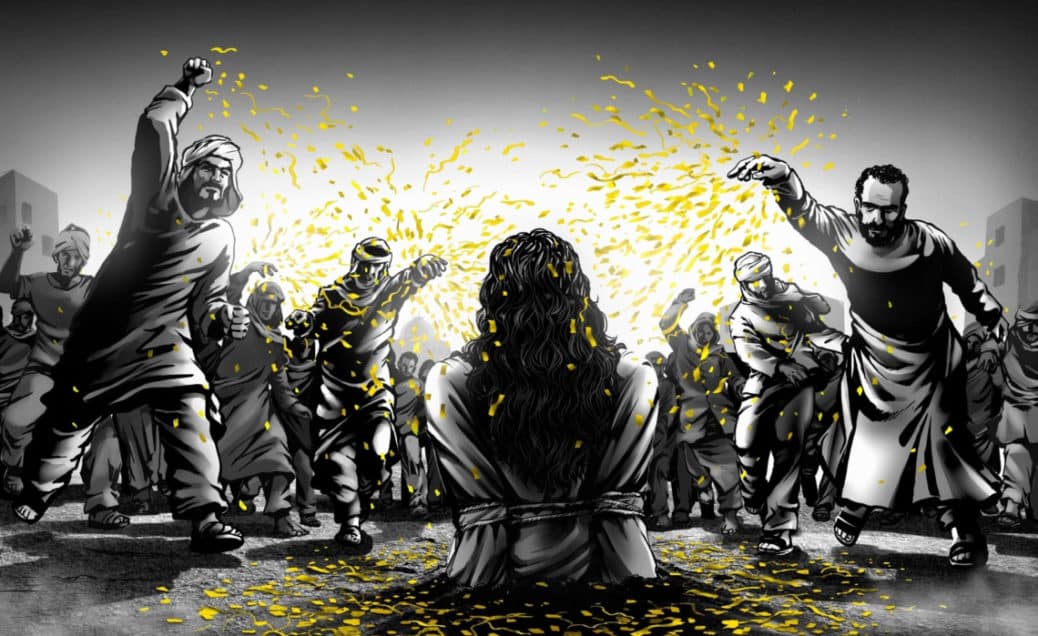 Islamic punishment for adultery is Rajam or stoning. Rajam is a barbaric and brutal practice. The Sharia mentions beheading as punishment for murder.

Beheading is horrible but it is much less brutal when compared with stoning someone to death. Is adultery a greater sin than murder? No, it’s not, adultery is an individual act. If a married person commits adultery divorce is a much more decent solution than stoning.

It has happened many times in the past few decades that people have been stoned to death under Islamic governments like Iran, Taliban, ISIS and Boko haram. Even during Zia Ul Haq’s regime an 13 year old blind girl was sentenced to be stoned to death by a Sharia court, but the decision was overturned because of national and international pressure. This punishment is called Rajam according to Islamic terminology and is one of the most gruesome and inhumane punishments imaginable.

I have talked to many Pakistani Muslims on the topic of Zina(Adultery) and punishment of Rajam. Many people find it perfectly alright and, in some cases, favorable to adopt the punishment of Rajam to control indecency and adultery. They think that this punishment is Allah’s perfect solution to control adultery in an Islamic society. But why do normal people favor such a barbaric practice? The answer lies in Islamic Sharia, which according to a Muslim is the perfect solution to all the legal problems from the time of prophet Mohammed to the end of times.

Sharia is the Islamic law and according to Islam it is the only law that should be practiced in an Islamic society. The laws defined in Sharia are believed to be carved in stone and are termed by Hudood Allah (Limitations set by Allah). Which means that these laws cannot be altered or replaced by human beings.

There is no mention of Rajam in Quran but there are many Hadiths which mention Rajam as a punishment on the behest of Prophet Mohammad.

[Narrated ‘Aisha] “The verse of the stoning and of suckling an adult ten times were revealed, and they were (written) on a paper and kept under my bed. When the messenger of Allah passed away and we were preoccupied with his death, a goat entered and ate away the paper.” [Musnad Ahmad bin Hanbal. vol. 6. p. 269; Sunan Ibn Majah, p. 626; Ibn Qutaybah, Tawil Mukhtalafi ‘l-Hadith (Cairo: Maktaba al-Kulliyat al-Azhariyya. 1966) p. 310; As-Suyuti, ad-Durru ‘l-Manthur, vol. 2. p. 13]

In Sahih Al Bukhari there are several Hadiths which mention Rajam.

Narrated Ibn ‘Abbas: ‘Umar said, “I am afraid that after a long time has passed, people may say, “We do not find the Verses of the Rajam (stoning to death) in the Holy Book,” and consequently they may go astray by leaving an obligation that Allah has revealed. Lo! I confirm that the penalty of Rajam be inflicted on him who commits illegal sexual intercourse, if he is already married and the crime is proved by witnesses or pregnancy or confession.” Sufyan added, “I have memorized this narration in this way.” ‘Umar added, “Surely Allah’s Apostle carried out the penalty of Rajam, and so did we after him.” [ Sahih al-Bukhari, 8:82:816 see also Sahih Muslim, 17:4194]

A Jew and a Jewess were brought to Allah’s Messenger (ﷺ) on a charge of committing an illegal sexual intercourse. The Prophet (ﷺ) asked them. “What is the legal punishment (for this sin) in your Book (Torah)?” They replied, “Our priests have innovated the punishment of blackening the faces with charcoal and Tajbiya.” `Abdullah bin Salam said, “O Allah’s Messenger (ﷺ), tell them to bring the Torah.” The Torah was brought, and then one of the Jews put his hand over the Divine Verse of the Rajam (stoning to death) and started reading what preceded and what followed it. On that, Ibn Salam said to the Jew, “Lift up your hand.” Behold! The Divine Verse of the Rajam was under his hand. So Allah’s Apostle ordered that the two (sinners) be stoned to death, and so they were stoned. Ibn `Umar added: So both of them were stoned at the Balat and I saw the Jew sheltering the Jewess. [Sahih al-Bukhari 6819]

Sick and inhumane societies adhere to brutal punishments like rajam, these societies brutally suppress rebellion against old and brutal practices. Societies which especially oppress women employ horrible punishments like stoning. There are some pinching weaknesses in Islamic Sharia that demand strict laws like Rajm.

Naturally, if a man weds four women at a time, some of his wives will be much younger than him. His first wife could be similar in age to him, but his fourth wife could be the same age as his daughter(as in case of Prophet Muhammad). And surely this man cannot fulfill the sexual need of all of his wives. Men who have more than one wives happen to ignore their older or less favorite wives. The first wife who is not young and beautiful doesn’t get much attention as one of the younger wives. In order to fulfill her romantic needs she could look elsewhere. Which can result in Rajam or stoning.

Polygamous societies more than often force child marriages. A young woman will definitely prefer a partner of her own age. In case of forced marriage anyone could become part extramarital affair deserving rajam. Men involved in affair with such a woman often run away and women are the sole victims of Stoning.

A man reserves the right to divorce his wife at any time. He says word “Tallaq” three times and divorce happens. But on the other hand a woman has to appear before a Qazi(Judge of an Islamic court) if she wants a divorce. If the Qazi deems fit then she will get a divorce. In this case, she has to prove that her husband is not fulfilling his duties, but men have no such obligation.

If they want to divorce a woman who is fulfilling all her duties they can. If a women who wants divorce and does not get it from the court can still be victim of stoning in case of a romantic relationship with some other man.

Muslim women are indoctrinated, forced to wear hijab and are married and divorced unwillingly . Oppression of women is reason enough to inflict strict hijab, gender segregation and punishments like rajam, because men do not want women to show themselves and attract suitors. Islamic enforcement of rajam or stoning also serves to oppress women through force and fear of a horrible death.

Oppression of women required Hijab, Rajam and other barbaric Islamic laws are required. Even Islamic paradise is an insult to a woman because a woman does not need seventy sexual partners, she only needs a loving partner, who respects her. Sex with seventy virgins is a male desire. Secondly, Islam’s imaginary paradise does not allow women to have sex with seventy male virgins even in paradise.

Stoning or Rajam proves that Islam is a barbaric oppressive ideology which can never be applicable in the 21st century.